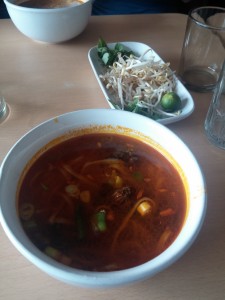 It is no secret that I am a fan of Puerto Princesa (as evidenced by the post here) and the food. Fresh, cheap and uncomplicated, it’s easy there. Everything is mostly a tricycle ride away. I could go on and on about what I love about the place, but that is not the point of this post, but the chaolong.

I discovered chaolong on my 3rd(?) visit to Puerto Princesa. I had gone to other Vietnamese joints previously (Saigon) and raved about it, but on the third, we went to local favorite Bona’s, who serve the most local version of the beef noodle soup. It is not fancy. It’s mostly a bowl of tasty broth, a few chunks of beef and noodles. The ambiance is your typical Filipino down home joint, al fresco dining, utensils in hot water for cleanliness, monoblock chairs strewn across the way. It was awesome. They also had a Yakult slush shake that was perfect to cool off after the hot broth and thick french bread. It is one of the reasons I miss Puerto Princesa, and rightly so.

When we read that there was a chaolong place in Quezon City, we had to go. People’s reviews online were raving about it, and even in this crazy summer heat, we itched to try a bowl. So off we went one lunch after errands last week, in the blazing heat. We almost missed it, even if it was along Roosevelt. If you’ve been along that road, you know that there are a lot of establishments along the road and if you blink, you’ll miss it. Thank goodness for the large sign proclaiming “Chaolong”.

It was humble too, al fresco, empty, had a few pieces of baked goods in the display. We ordered bowls of chaolong and plain french bread to dip in. It took a while to serve, we assume that it’s because they make it to serve because of the aforementioned quiet space. So if you go, prepare to wait around 10-15 minutes to get your bowl.

It was not spectacular, it was mostly, okay. The bread was the savior of the meal, being the right amount of crusty without being dry. The chaolong was a little off, but good enough to satisfy cravings until you head back to Puerto Princesa for the original. A bowl will set you back P65 and bread will be P15 per roll. Good for lunch, especially when it starts to rain. They are open 7 to 10 Monday to Saturday and 8 to 7 on Sundays.

How to get there: Drive along Roosevelt Munoz until you see the Metro Gas Station with the 7-11. It is right across from there.

And now to petition them to make Yakult slush.