I am not known for my healthy eating choices. In fact, I’ve had not less than four people tell me expressly that they avoid my social media feed so as not to get hungry. And I do admit that it’s my vice. Some people drink, some people smoke, I eat. And it’s not pretty and there are several chins and wasted wardrobes to attest to the fact that I am a woman who really likes to eat.

In a bid to offset my binge periods (of which there are many), I try to eat better when I am working. There have been several months of chicken in salt free marinades roasted in a turbo broiler (none of which can be called anything else than sad chicken), sugar-free cold brew coffee, and now overnight oats.Â 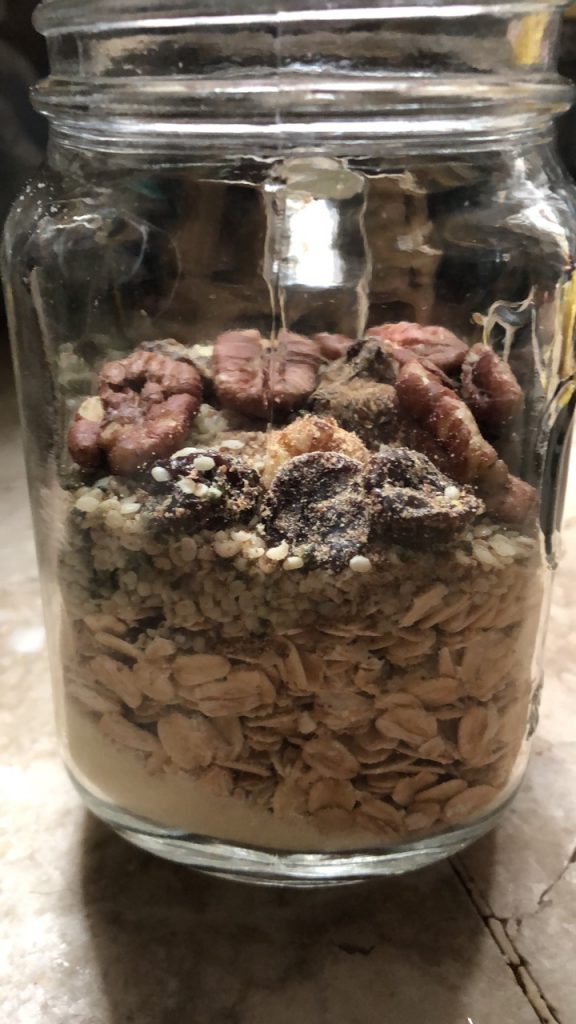 I would like to precede this conversation by revealing that I hate oatmeal. It’s mushy, sad, and feels like glue after half a cup, and for some reason, makes me ravenous for “real” food after an hour. I did have a ton of granola ingredients from my trip to the US last year in which to play with so I figured, how could half a mason jar worth hurt? So I assembled the following in a jar and put it to stew in the fridge:

It’s not very scientific but I figure the flaxseed meal adds a bit of nuttiness that makes it less glue-y, and the hemp hearts and nuts add bite and texture (again to counteract the glue-y). So far I have been eating this at least three times a week for the past three weeks. It’s not helping me lose weight (especially when I forget and eat a whole bottle in one sitting), but I figure the oatmeal helps counteract all the bacon, bagnet, chicharon that I have been consuming due to great opportunities and the lack of self control that comes with vacations.

It’s great. It keeps me full at least four hours, and it doesn’t make me feel like I’m restricting myself. It’s not very cheap and it will be a challenge to find replacements to some of the ingredients when I run out, but so far, I like it.

I’ll let you know what I find to replace when things run out.

What do you eat to counteract all the bad things you do to your body?